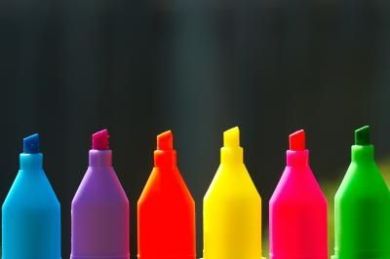 At the junction ahead of me two cyclists are waiting for the lights to change. One, a guy dressed in everyday clothes, is positioned at the head of the traffic – directly in front of the line of cars. The other, a girl wearing a fluorescent jacket so bright it makes my eyes hurt, is waiting patiently on the left of the traffic, alongside the front car.

This got me thinking. Which of those two cyclists is most visible?

Well, duh, you might think. The girl in the fluorescent jacket, clearly. There’s a reason why it’s called ‘hi-viz’.

Not necessarily. According to an article in last week’s Guardian, wearing head-to-toe hi-viz doesn’t guarantee a cyclist will actually be seen. Research carried out by the Transport Research Laboratory has found that, in fact, what’s most visible can change depending on things like where you are, what’s around you and how light it is.

(Admittedly the article was based on research into motorcyclists, rather than us humble pedal cyclists – so perhaps there are limitations to this argument.)

I don’t wear hi-viz. I used to. I used to have a fluorescent yellow jacket, just like the one the girl was wearing. But it was ugly. I decided I wanted a jacket I could wear on my bike and off, so I switched to a more tasteful purple jacket.

Am I less visible now than I was before? All cyclists, I think, have times when they assume they must have become invisible. But in the year since I started wearing my purple jacket I don’t think I’ve been any more invisible than I used to be. No-one’s knocked me off. I’ve barely even had any close calls.

But then maybe that’s also because I try to cycle in a way that makes me as easy to see as possible. I try not to sneak up on someone’s left hand side while they’re not looking. I stay away from blind spots, particularly those belonging to large vehicles. I most definitely do not kerb-hug.

And if I’m at a junction and the lights are on red, I try to plonk myself right at the front. Right in front, in fact, of whatever vehicle might also be waiting there too.

Because, frankly, if a driver can’t see me in broad daylight while I’m right in front of their car, then that has to mean one of two things. Either they really shouldn’t be allowed to drive – or they’re simply not looking. And no amount of hi-viz will change that.

Going back to those two cyclists at the junction, I’ve no idea which one was most visible. Maybe it was the girl in the hi-viz jacket after all. But you know what? As long as the other road users could see both cyclists, I don’t think it really matters.

9 thoughts on “What does it take to be seen around here?”