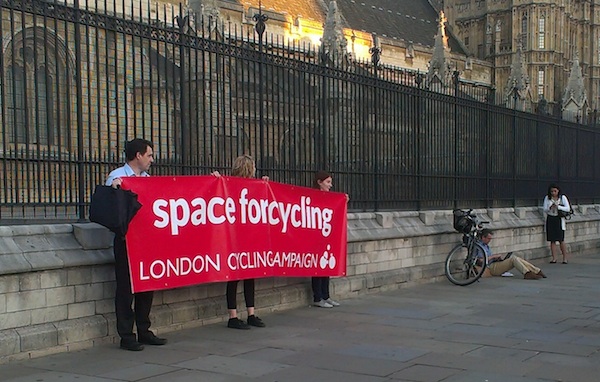 Demanding space4cycling outside the Houses of Parliament

“Don’t get me wrong, I mean, best of luck to you all, but London wasn’t built for bikes – it was built for cars.”

The policeman on duty outside the Houses of Parliament that Monday evening seemed a little bemused by the sight of so many cyclists massing on Parliament Square. Compared to the many other protests that have passed his way – anti-war, anti-student fees, anti-capitalism – I got the feeling he thought our concerns were a little, well, trivial. Irrelevant, even.

Irrelevant? Trivial? Clearly the 5,000 or so cyclists – myself included – who were taking part in that evening’s space4cycling protest, organised by the London Cycling Campaign, didn’t think so. We’d set off (somewhat later than the scheduled 6.30pm start time) from Jubilee Gardens, and snaked in a mile-long chain over Westminster Bridge, through Parliament Square and past the House of Parliament just as the All-Party Parliamentary Cycling Group was debating the recommendations of the Get Britain Cycling report.

The message from the protest was clear – space4cycling on the streets of London.

I have to share that space with drivers who don’t always look out for me, who don’t always give me the space I need and who sometimes don’t even think I deserve any space. I have to watch out for the driver who hasn’t seen me, the driver who’s about to turn without indicating, and the driver who thinks I’m in his way. I have to make snap decisions about what’s safe, while also knowing that the wrong decision could see me over my handlebars or under somebody’s wheels.

To me, the need for a safe space for cycling, separate from the rest of the traffic, is blindingly obvious. Not only would it make cycling around London a much more pleasant and safer experience for me, I have visions of it encouraging many more people to get on their bikes. With so many potential benefits – a fitter, healthier and happier population, and a less congested and polluted city being but a few that spring to mind – it’s a wonder politicians aren’t falling over themselves to meet our demands.

Just me and around 5,000 other cyclists crossing over Westminster Bridge

Hmmm…but they’re not, are they?

You could argue, as many have, that the political will just isn’t there yet. That it takes time for change to happen. That to give us the space we’re asking for would mean taking it away from someone else, and whoever that ‘someone else’ is, they won’t be happy. That the pro-car lobby is incredibly powerful, and has significantly more money behind it than we do.

No. The problem is that, while the need for space4cycling is a no-brainer for many of us who already cycle, for the majority – people like that policeman outside the Houses of Parliament – well, it’s not.

I mean, I even sometimes struggle to persuade my non-cycling friends that there’s a need for it. In response to my stories of near misses and close calls, they simply point out that it’s not as if I have to cycle. I could just get the Tube instead. And, when I’m trying to sell space4cycling to them, if the best I can offer them is that they might want to take up cycling as a result…well, it’s hardly surprising they’re not interested.

Therein lies the crux of the matter. If we’re going to succeed in our call for space4cycling, we need the support of people who don’t already cycle. The trouble, we’re not very good at articulating just why they should support us. Too many arguments have been focused on the benefits for people who already cycle – but what are the benefits for someone who doesn’t cycle? Just about everyone I know has a story of a bloody cyclist running a red light, barrelling across a pedestrian crossing or otherwise behaving in a reckless manner. Given that many of these people would probably prefer it if there were fewer, rather than more of us, how do we persuade them to support our cause?

I don’t have the answer to that. Any suggestions?

11 thoughts on “So, why do we need space4cycling?”