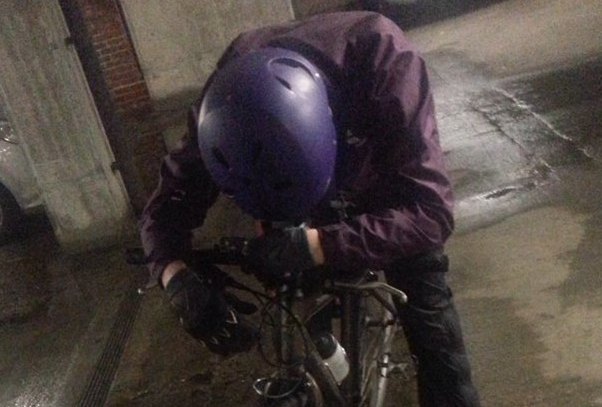 I survived the return to reality – but only just

I swing my leg over the saddle and nudge my front wheel into the space between two parked cars. Glancing up and down the street, I’m struck by the silence. No cars scraping over the speed bumps. No heels clicking along the pavement. No front doors being slammed. No builders preparing for the day’s work.

A thought enters my head: have I made a mistake? Is it really today I go back to work? Should I, in fact, still be in bed?

So if yesterday was New Year’s Day, then today must be 2 January. It’s not a Bank Holiday – at least not here in London – nor is it the weekend.  Foolishly, I didn’t think to book any time off after the New Year so I’m not even meant to be on leave.

I reach the only conclusion possible: I haven’t made a mistake. I really do have to go to work.

Like, I suspect, most people, I have spent the best part of the previous two weeks in a state of lazy indulgence. I’ve eaten and drunk far more than is good for me, and I’ve done almost no exercise: my trusty steed has stood – pelted with rain and buffeted by the wind – neglected in the back garden. I’ve lain in bed until well past noon, relishing the knowledge that there was nothing I had to do and I could get up whenever I wanted to. When I haven’t been in bed, I’ve largely been on the sofa: knitting, reading and watching TV.

I know this first commute of 2014 is going to be painful. The trouble is, I haven’t quite anticipated just how bad it is going to be.

My legs are grumbling and complaining even before I get to Finsbury Park. Heading up to Tufnell Park – the gentlest of inclines – I’m using gears normally reserved for the climb up Pond Street. And as for that mountain – by the time I’ve reached the top of it, every muscle in my body aches and I’m panting like someone with a 50-a-day habit. I have to pull over and rest for a moment to catch my breath.

Anyone would think I’ve never cycled before.

The wind isn’t helping either. Over the years, I’ve grown accustomed to cycling into the wind on my way into work – that’s what happens when you head from east to west. Most of the time, I accept this as a fact of nature. This morning, though, it feels like a personal affront. The wind really is against me.

Eventually, after what feels like the longest commute ever – but is, in reality, quicker than usual thanks to the almost total absence of traffic – I arrive at work. I head down the ramp into the car park, and I’m greeted by the sight of my colleague Kate walking away from the bike racks, her yellow and orange fluorescent vest a beacon of welcome.

“Hello,” she says, a note of surprise in her voice. “I didn’t think you were in today.”

Welcome to 2014, folks. Hope your return to reality was somewhat less painful than mine.