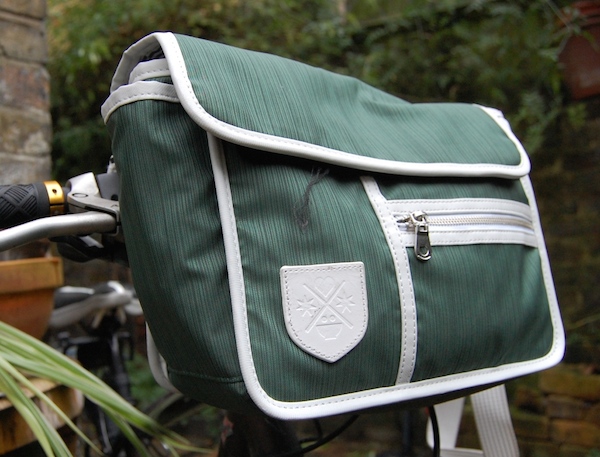 It looks great – but how well does it work as a bike bag?

Let’s face it – most bags designed for use on a bike are not particularly attractive.

The demands of practicality and function mean that aesthetics are usually the poor relation. For those of us who want a bike bag that looks like something we’d carry when we’re not on our bikes, this can be a little frustrating.

Thankfully, with the rise in urban cycling and cycle chic, an increasing number of companies are coming to realise there’s a market for bags that work both on and off the bike.

One of these is Hackney-based Goodordering, whose range – launched in 2013 – includes a pannier, shopper, backpack and handlebar bag. Inspired by Japanese school bags and airline bags from the 1970s and 80s, and made from water-resistant nylon, each of the bags comes in a choice of suitably retro colours – forest green, chestnut maroon and rust. They’re intended to be both practical and stylish.

They certainly win points in the coolness stakes. But how well do they work as bike bags?

The essentials
I won’t lie – this bag is smaller than I’m used to carrying on my bike. But, while I couldn’t fit a change of clothes in it, there’s plenty of room for the essentials – bike lock, wallet, keys, phone, lights and bottle of water. It also has a pocket for an iPad or other tablet device, two side pockets and a zipped inside pocket.

The bag fastens with a Velcro flap, which means it’s easy to get at your stuff – for example, while you’re stopped at the lights. The downside to this is that it’s not completely sealed, so it wouldn’t work in a downpour.

That aside, it’s a robust little bag. Even after a few months of use it’s kept its shape, and the Velcro is also holding up well.

Fitting
This is the first time I’ve used a handlebar bag on my bike, and actually fitting it proved a bit of a problem. This may have been to do with the shape of my handlebars, which are probably not designed for a bag like this – getting the straps to fit around the brakes, light fitting, reflector and bell was a bit awkward.

The straps fasten with a clip attachment, which can be quite hard to get done up compared to other fasteners on bike bags I’ve used. Once done up, though, it is secure.

If, like me, you have problems fitting the bag on your handlebars, it can also fit on a pannier rack.

From bike to life
I haven’t been using this bag for commuting – it’s too small, plus I’m worried about my stuff getting wet in the rain. However, for those times when I’m just popping out on my bike to go for coffee, meet friends or something like that, it’s perfect.

One of the things I really like about this bag is the ease with which it transfers from bike to life. It comes with a detachable shoulder strap, which fits easily into one of the side pockets when it’s not in use. Once you’re at your destination, simply unclip the straps holding it onto your bike (which is easier than putting it on!), clip on the shoulder strap and away you go.

In fact, it works so well as an ordinary shoulder bag that that is mainly what I’ve been using it for. This, I think, is its greatest strength – it’s a bike bag that I genuinely want to use even when I’m not on my bike. And how many bike bags can you say that about?

Verdict
This isn’t a bag that’s going to meet your every need on the bike. But is a handy little bag that looks great – and also happens to fit on a bike.

The bag is available from Goodordering for £32.