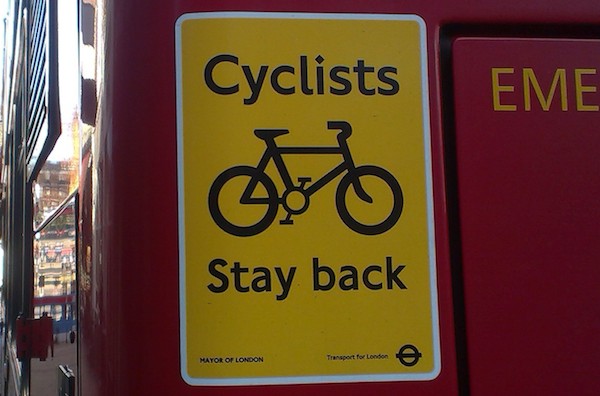 One morning last week a set of temporary traffic lights had been set up at the junction just past my work, causing a tailback at least half a mile long. This wasn’t a problem for me – though the road is single lane, it’s at least two cars wide in places. Plenty of space for a girl on her bike to whizz through between the traffic and the pavement.

As I pedalled past the virtually stationary line of buses, lorries, vans and cars, the odd flash of yellow on the back of some of them caught my eye. I didn’t need to read them to know what they said.

First introduced last year by Transport for London for use on the back of buses, the stickers are now spreading like a rash across London. In theory, you might think, this is a good idea. Large vehicles and their equally large blind spots are a particular hazard for cyclists. Despite the number of cyclists who’ve been killed after getting caught in the blind spot of an HGV, and despite countless warnings about cycling up the left-hand side of large vehicles, I still sometimes see cyclists doing exactly that. So anything that helps get the message out there has to be a good thing, right?

Not necessarily – and this is why a number of road safety organisations, including the London Cycling Campaign and RoadPeace, have grouped together to call for them to be removed. Their joint statement, released at the end of last week, outlines exactly why the stickers are a problem, and what they would like to see in their place.

Over the past few months, I’ve grown to resent those little yellow diktats more and more. Whenever I see one – particularly on the back of, say, a small van – my first reaction is to think, Cyclists stay back? Why should I?

There are times when I really do need to stay back – such as when there’s an HGV ahead of me, or a vehicle has its left indicator flashing, or there’s no room.

If the traffic is moving, albeit slowly or in fits and starts, the left-hand side is often the best place to be. I don’t want to get caught on the right of the traffic when it moves forward, nor do I want to weave in and out of it.

If the traffic is really not moving at all – as was the case on my ride into work last week – then I’ll go where there’s space.

If I’m confident I can get ahead of the traffic before it moves, and I won’t be cycling headlong into oncoming traffic nor getting caught up with motorbikes, then I might head down the right-hand side of the traffic.

Being told to stay back implies I have to defer to other road users. It implies I’m doing something wrong simply by being there, as I should, on the left of the traffic. And it implies that drivers don’t have to watch out for me.

If I want to stay safe on the roads of London, there’s only so much I can do myself. I need other road users to look out for me, and to respect my right to be there – and for that reason alone I sincerely hope these stickers are removed.

11 thoughts on “Why should I stay back?”